The first session of the Spring Camp: Soccer en Français was held Saturday, May 5th, at the French school, École Gabrielle-Roy. The future stars met their team mates and coaches with whom they will practice each Saturday until June 23. 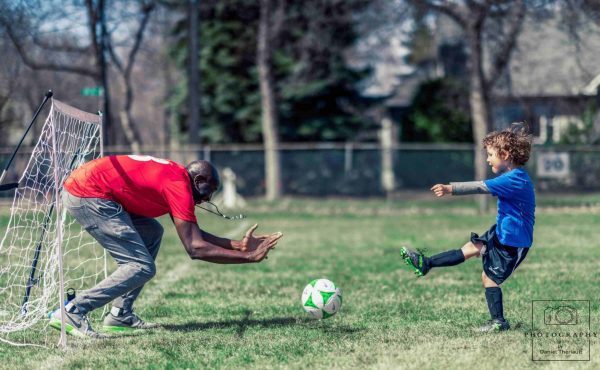 Many of the young players eagerly ran to the soccer fields at the start. With their families, players quickly scored their first goals under the supervision of the four coaches Giscard, Modeste, Théodore and Lamine “Fox”. Some parents chose to partake in the fun as assistant coaches and were involved in a few drills. For a number of children, this was their first experience with soccer. The main purpose of this session was to familiarize children with warm-up exercises and to run with the ball.

A queue has formed while waiting for photographs.

Children in the 3 yeas and 4-5 years categories were the first to arrive, followed by 6-8 years and 9-10 years. Each child received a “Soccer en Français” jersey and a ball with which to practice during the camp.

For the families who opted in, photographer Daniel Thériault took photos of the children as mementos of the exploits of their little Ronaldos at the very first French soccer camp in Edmonton!

For players with previous experience in soccer, were able to show off their skills and contribute to the game. Coaches and other volunteers became goalkeepers to the delight of the scorers.

To add more stars in the eyes of children, what better than the presence of a journalist? Sébastien Tanguay from Ici Alberta joined the event. After short interviews, he toke some pictures that you can find on their facebook page Ici Alberta.