2018 is a great year for soccer. The FIFA World Cup in Russia, Canada’s nomination for co-organizing it in 2026, and the first “Soccer en français” camp in Edmonton. For seven sessions, May 5 to June 23, about 60 children played soccer either for the first time or to improve their skills. With the skills they learned through mini-games, drills and matches, our future stars can now impress their friends during the summer. 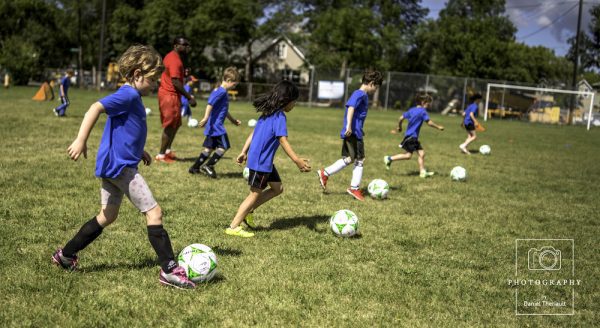 Participants followed the methods of the Canadian Soccer Association.

If the final whistle had not sounded, the sessions would have lasted much longer than the time allowed. Even the rain on June 9 did not slow down the players.  Parents and other members of their families came out to encourage participants every Saturday morning.

The “bonjouuuur” of Coach Giscard was answered loudly by participants before the beginning of each training. The children were truly ready to train and have fun. But to start each session: warm up!

For the little ones of 3 years of age, the soccer adventure took the path of pirates, explorers, or cars in the city. The treasure hunt and wild animal chase could then begin! Helped by one of their parents during the training sessions, these young participants started to develop the love of the game.

The older kids benefited from more specific training. Some discovered the role of a goalkeeper and were able to start working on these skills.

The certificate, a deserved reward.

For their excellent work during practices and engagement, the young players received a certificate of participation. Signed by the coach and the main coordinator, the children enjoyed this souvenir of the good time they had spent and skills they had learned. The training followed the methods of the Canadian Soccer Association. A team picture by photographer Daniel Theriault of DT Photography completed the presentation of the well-earned mementos. 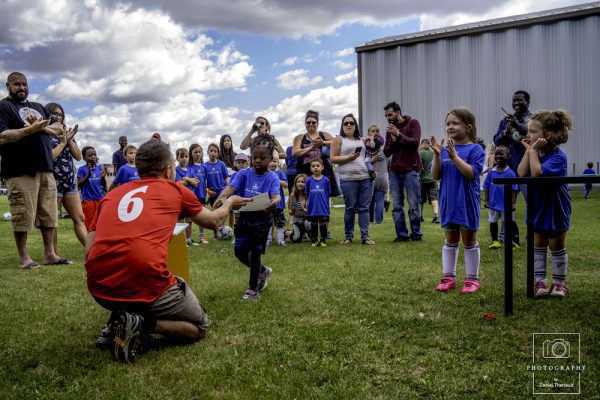 During the last session, a collective training took place. Groups were combined for the great pleasure of the participants who were encouraged by all the parents.

The joy of the children and parents at this first camp encourages the organizers to plan future sessions. Stay connected to know our next initiatives!

Edmonton Fusion FC would like to thank its volunteers who contributed to the success of the event.

The Soccer en français Camp is an initiative of the Edmonton Fusion FC and Pont Cultural Bridge associations.